Staying close to its historic agricultural identity, Stony Plain remains a favourite of the farming community. It is an idyllic representation of what “farm to table” truly means, making it a perfect match for both small and emerging producers. The Town capitalizes on the strong demands for local food in Alberta, while providing all the necessary amenities such as workforce, availability of materials, access to markets, and suitable buildings.

EARTHAPPLES: GROWING BY THE MINUTE

EarthApples was founded on a strong potato tradition spanning many generations across two continents. EarthApples’ roots were formed in the Netherlands, where the founding family began growing potatoes on a small traditional farm using mostly European potato varieties and agricultural practices. Seeking a new challenge and new opportunities, the family moved to western Canada in 1988 and settled in Stony Plain, Alberta. 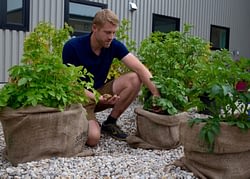 EarthApples is in the business of providing seed potatoes for urban gardens, with most of the seed potatoes used for the business today grown in and around Stony Plain. The area also serves as one of the best regions in North America for high-quality seed production. As for the location, Phil Bakker of EarthApples said, “The local feel is the best part. Ever since we set up the building, we have had ample engagement and interaction from Stony Plain. You can really tell there is an interest in not only entrepreneurship, but also fostering new business.”

“Stony Plain has come out to our location to see the facilities and really get to know our business. Since that visit I have been presented with many opportunities to promote EarthApples, including involvement with CultureFWD, a networking initiative with the goal of helping our community to understand the creative industry, its role in the region, and its positive impact on the economy.”

In addition to the current infrastructure, there remains unlimited growth potential. Continued Bakker, “Stony Plain sits on an aquifer. As someone in the agriculture industry, I see this as an additional opportunity to develop a productive irrigation system in the outlying farm fields. Last year we had a drought and Parkland County was in a state of emergency, however, there was still plenty of water to be found in Stony Plain.”